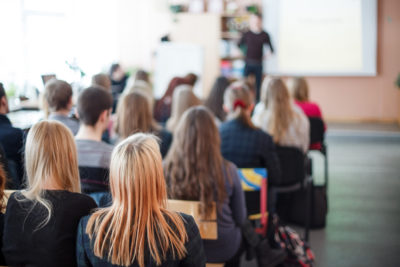 Thankfully, it no longer happens in my house, but as it’s May there will be many teenagers suffering from exams angst and at least as many parents either getting over-involved or watching from a distance as their offspring are put through a system which, like it or loath it, will shape their future career … or will it?

Age seems to be teaching me many things and one of them is that the individuals I find most impressive aren’t the ones who have followed the conventional path of good school grades leading to university entry and from there a good, stable job “with prospects”.

No, the older I get my inspiration comes from those who either follow their dreams or are just brave enough to see an injustice and work to try to change it.

It’s particularly poignant at the moment as I’ve watched a friend’s son standing for election as an independent candidate in the area where he was born and brought up. He knows from bitter experience how poor our mental health services are and how difficult it is to go through our education system when you’ve been labelled from an early age. The inspiring bit is that he’s brave and committed enough to try and do something about it, so others don’t suffer the way he did.

It’s all the more impressive when you’ve followed his educational journey through our “one size fits all” system and the price one can pay for not fitting into it. If you weren’t privy to this information, you’d think he was just a very thoughtful, eloquent and well educated young man … which he is, just not in the conventional “look at all my school certificates” sense.

So, for anyone worrying that their offspring won’t achieve their “potential” this year … maybe it’s because the current system doesn’t allow them to show it, or because it’s the wrong time for them. I know from experience that it’s difficult, but instead of getting wound up when they’re still in bed mid-morning or fiddling on their mobile instead of revising, let them overhear you and your family or friends playing that game of “What would you do with your life if you were a teenager again”, I’ve yet to hear someone say “Exactly what I did when I was one”!