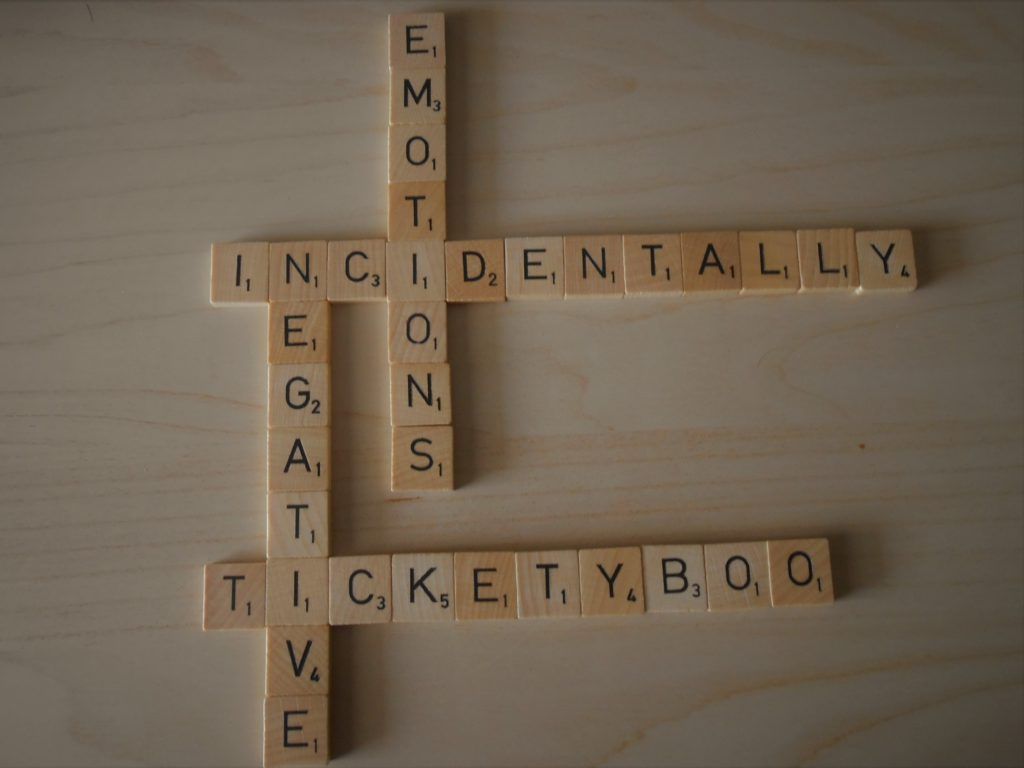 Negative vocabulary can have a real affect on our emotions

It all began because my siblings and I have been spending a lot of time with my father this year.  For anyone who remembers the column where that journey began, I can quickly update you that he is now happily moved into his new abode; the old house is cleared and hopefully sold; and his children are slowly recovering from the physical and emotional turmoil resulting from months of spending each weekend involved in the process.

Anyway, what became one of the many jokes which got us through this period was the frequency with which he used the word “incidentally”.  Our hearts sank whenever a sentence began with it as we knew it would be followed by “did you find”, “remember” or “your sister/brother said” and involve yet more work or discussion.  It became the catchphrase on many of our “to do lists” and debates on whether to chuck, save or sell various items in the house; not to mention a few wry smiles when he uttered it in the presence of more than one of us.  Unfortunately, like so many such jokes, it then sorely backfired as its usage rubbed off and I found it had worked its way into my everyday vocabulary.

What could I do except pinch myself every time I realised I’d used it with my out-loud voice?  Well, as ever, there’s an answer for everything if you look in the right place.  So, I found myself trying to follow the guidance of Tony Robbins and his “Transform your words in 4 steps” blog.  I know the examples he uses are for replacing negative words and phrases with something less negative and more realistic to help you change the way you feel.   Quite frankly, using this one fairly short, neutral word had a negative emotion attached to it after my recent experiences, so I thought I would try his 4 steps regardless.

It should come as no surprise that ‘incidentally’ wasn’t on its own for long!  The first step of the exercise is to notice the vocabulary you use and the label you put on things to describe your unhappy feelings.  I could certainly tick his first example of overusing the word “worry” and noticed I “really worry” about things a lot!  My response to being asked “How are you” could do with a makeover too, as my sarcastic responses may not conjure up the most positive emotions – in my defence I do live in Scotland, so am usually either looking like a drowned rat or removing hair from the centre of my face from where it’s been left by the wind when I’m replying to that question.

Step 2 was identifying three words you use on a regular basis that intensify negative feelings or emotions. Well, I had ‘incidentally’ and ‘worried’ but struggled for a third so cheated a bit with a phrase rather than a word, as ‘fed up’ seems to have crept in over this same period!

Step 3 – find 3 positive words that you can say and own consistently which will increase your positive feelings and inspire you.  Hmm, that took a while!  Using his tips to consider your response to “How’s it going” and a positive word you come up with when thinking about your whole life, I settled on ‘tickety-boo’, ‘great’ and, cheating again, ‘pretty damn good’.

The final step is to choose two accountability buddies who you give permission to pick you up whenever they hear you use your negative words and check with you that you really mean to use them or want to lower their intensity.  I’ve discovered it’s just ‘tickety-boo’ when the tables are turned from their teenage years and your adult children get the chance to suggest you might wish to correct your vocabulary!

It’s an interesting exercise and I shall definitely persevere as it’s making me more aware of how my language can affect my emotions … but it is ‘incidentally’ still ongoing!