Home > Blog > Why we should try to resurrect that long forgotten landmark of the working day, the lunch hour 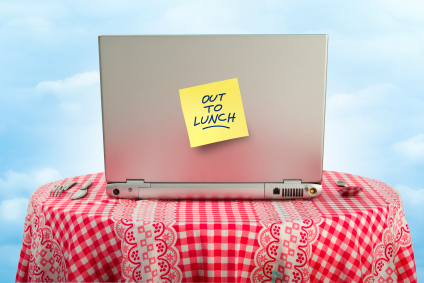 Why we should try to resurrect that long forgotten landmark of the working day, the lunch hour

Hands up if you took a lunch break today?  I don’t know why it’s been such a hot topic of conversation this week but on three occasions people have mentioned (mostly as part of a story to do with health) that lunch consisted of consuming a sandwich at their desk or on the move to another appointment.

Do you remember when people used to refer to what they did on their lunch hour?  Now it seems that we’re lucky if we escape the confines of the office walls to buy a pint of milk for our afternoon cup of tea.  Long before I had my own children, I remember it being a great source of amusement where I then worked when a colleague told us that if it hadn’t been for her and her husband’s “home lunch” every Wednesday when the children were at school, their marriage wouldn’t have survived!  I regretted her ever telling us as we all found it difficult to keep straight faces when we then noticed that she rushed in late, looking totally flushed, every Wednesday afternoon.

But, in retrospect, maybe she had the right idea.  Maybe leaving her work environment and worries behind for an hour to do something completely different allowed her to return to work with renewed vigour whilst at the same time resolving a few of her home life stressors?

It certainly can’t be any worse than another past colleague who was a bit fed up one day, not feeling at her best personally and a bit overloaded on the work front.  So, believing that a large intake of sugar would resolve all her woes, she ate her lunch (a large sugar doughnut and can of cola) at her desk.  I passed by and, as am wont to do, asked how things were.  I got a blow by blow account and reached over to pat her arm in an encouraging “it’ll get better” sort of way.  We both looked on in horror as, when she reached her free hand over to acknowledge mine, it knocked the can of cola which spilled all over her paperwork and keyboard whilst the remaining bit of doughnut which she had been holding crumbled and sprinkled sugar all over the already cola saturated keyboard.  The keyboard never recovered, the IT department was not happy and all round it wasn’t the best start to a busy afternoon!

So, I suppose the moral of the story is that at least if we all still took lunch breaks we’d have some memories of what happened during them – the good, the bad … or the entirely unexpected!